The plan was to get up at the crack of dawn and see Roma in the early morning light. But when do things happen as planned? We slept in till 8:15 am and woke up when the sun was already shining brightly over the tiled roof tops and the innumerable domes and spires in the city.

After a breakfast of croissants, coffee, yogurt and cereal we walked towards the Roman Forum. Sean only had a few hours to explore with me before he had to go to his meeting, so we decided to visit the Capitolini. A stepped up ramp, the Cordonata, leads to a magnificent square designed by Michaelangelo, and to the oldest public museum in
the world, the Musei Capitolini. The Tabularium, which occupied the space between the temple of Jupiter on one side of the Capitolini Hill and the steps which led up past the Carcer to the Arx on the other, unfurls a stupendous view of the Roman Forum. 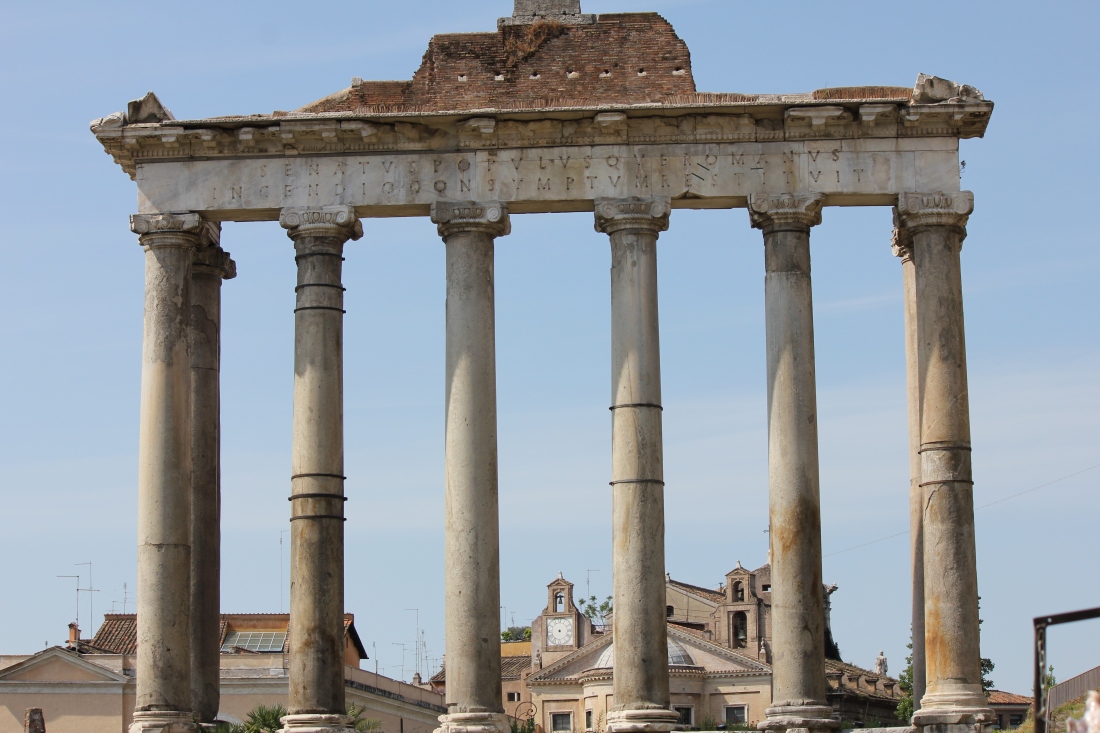 We took the the elevator up to the Dalla Terrazza Delle Quadrighe for a panoramic view of the tiled roof tops of the entire city of Rome on one side and the whole Roman forum on the other. The confluence of modern and ancient. I had worn a skirt up top on the terrace on a very windy morning. To prevent several Marilyn Monroe moments, I had to relinquish the camera to my esposo while I tightly held on to my billowing skirt. These are some pictures he took.

Sean, very unwillingly, left for work while I started walking towards my destination – the Colosseum. But this is Rome, one can’t purposefully walk towards one landmark, but simply has to make detours to do justice to the other gorgeous buldings, palazzos, chiesas (churches) strewn all across the city. I stopped to tour the Monumento a Vittorio Emanuele II. This huge monument by Guiseppe Sacconi was begun in 1885 and inaugurated in 1911. It honors King Victor Emanuele II who achieved unification of Italy in 1870 with Rome as the capital city. The dazzling white marble building is a sharp contrast to the warm tones of the city and looks jarring next to the ruins of the Roman forum. Although, this building is ridiculed as the Wedding Cake and Typewriter, I thought it was impressive if seen just by itself. 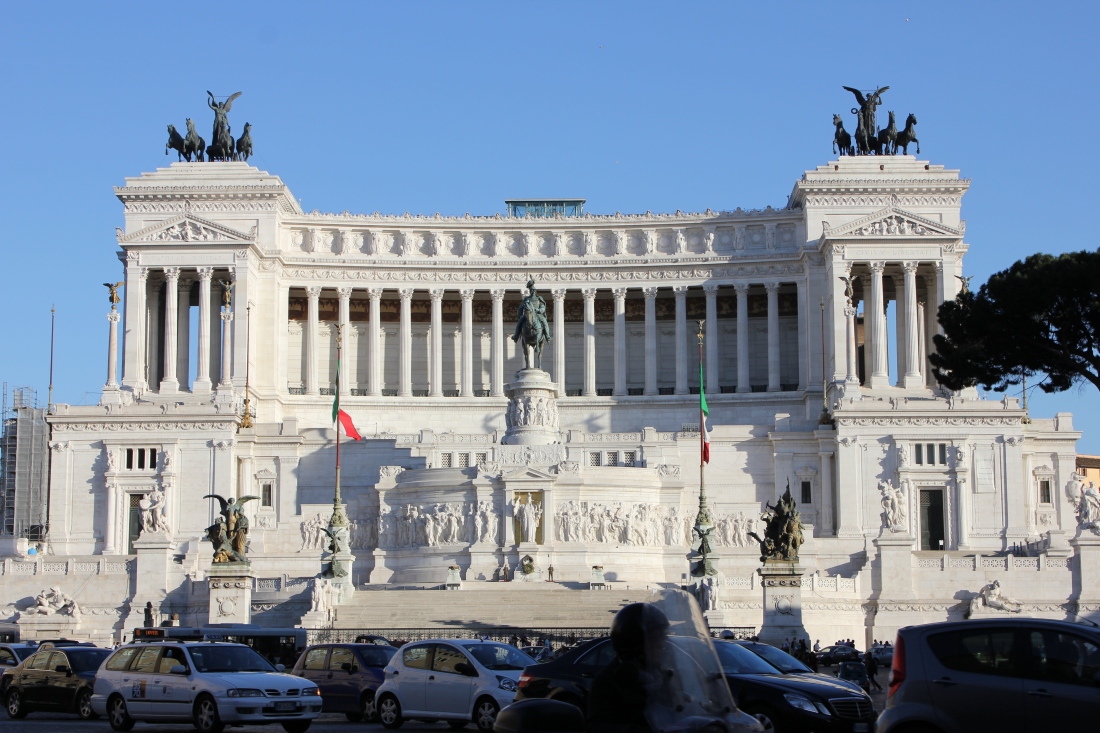 I walked with the crowds towards the Colosseum, smiling at the Bengali words I heard from the Bangladeshi hawkers selling their ware, the lost tourists scratching their heads while looking at the map, the excited voices and laughter of Italian teenagers, the grumpy parents trying to control the screaming toddlers because it was way past their naptime, the aggressive Italian drivers zooming past me and braking suddenly to let a clueless tourist cross the street. Most importantly, I was smiling at the blue sky and the bright, golden sun shining on my face.

When I arrived at the Colosseum, my smile disappeared. The line to get tickets was a mile long. The tour operators were luring people to skip the line and join their tour group at a steep price. I decided against waiting in line and wasting half my day, so took some outside shots of the Colosseum and went to Via Sacra (the Sacred road) flanked by pillars from the Roman era to look at the ruins of the Forum.

Next to the Colosseum is the Arch of Constantine, built in 315 by the Senate and the Roman people three years after Constantine’s victory over his enemy Maxentius.

I walked by the Colosseum to say my goodbye as I headed back, only to find the line had shrunk. I promptly placed myself behind some Italian men and starting chatting up an American couple from upstate New York, on their first trip to Rome.

Much has been already written about gladiatorial fights, animals, prisoners of war being killed, Christian devouts being martyred. I won’t get into those. I found some interesting information on the spectator’s past time. Supposedly, the time spent by the spectators was animated and lively. The audience engaged in wide variety of occupations, gaming and betting. Games were played directly on the amphitheater steps where they created tabulae lusoriae, carving them into the stone (game boards or checker boards). The counters were made from varied matereials (bone, glass paste, pebbles, pottery). The rules of the games are not well known but tabulae lusoriae is even found on the road across the Colosseum, the Via Labicana.

The entertainment always wasn’t innocent. There was betting involved which was banned in general and only allowed on certain days like the Saturnalia, the birthday of Saturn. Saturnalia was later replaced by the festivities of Christmas. Then, as now, gifts and food were exchanged and games of chance like Bingo, were made lawful for the day.

It has also been known that players hid from officials on the steps of the amphitheater, a large number of knuckle bones were discovered on the steps of the Colosseum. There were also pictorial depictions of brawls and lovely epigraphic fund of insults. The love of the games was very common. There was no distinction of class or sex, uniting both common people and the nobility, men and women. I liked this part.

The seating was interesting and of course, predictable. The series of stepped seating areas, the cavea, highlighted the distinctions between the classes of the Roman society, in progression – from low to high – of five sections, starting with the privileged seats on the podium next to the arena, up to the wooden steps inside the colonnaded portico occupied by the plebians.

I cannot mention Colosseum without talking a little bit of blood and gore. The blood of the gladiators was sponged up and fed a thriving business. It was believed drinking human blood cured epilepsy and of course, the blood of the martyrs had healing properties.

From the Colosseum, I walked back to the hotel without getting lost even once. I mention this simply because I don’t have a very good sense of direction and will never win any prizes as a map reader. Oh, and I always get lost! So when I saw the street of my hotel – it was a proud moment. A small pizzeria near my hotel was extremely crowded, thronged mainly by Italians, so I figured the pizza must be pretty authentic. Ordered a salami pizza and dealt with sweet Italian flirting by the pizzeria owner. If you want your pizza on the go, they cut the pizza up in two halves, make them into a sandwich and wrap them up for you. I took mine to the Area Sacra Di Largo Argentina (Sacred Area of Largo Argentina). This houses the remains of four temples, and is well known as well because it was used as the Senate and it was here that Julius Caeser was assassinated on March 15th, 44 BC. Now the ruins house stray cats.

Following the ‘when in Rome, act like Roman’ rule, went back to the hotel for a short siesta, and did some writing and editing pictures. Then headed out to the famous Piazza Novona for some music, artwork and people watching. It is always a lively place with musicians serenading the diners in the upscale restaurants surrounding the piazza, local artists selling their artwork, entertainers trying to entertain tourists with their acts. I sat there for a while just watching beautifully dressed men and women relaxing with drinks, dinner and cigarette. There is the beautiful Chiesa di S Agnese in Agone at one side of Piazza Novona. I went in. The architecture and frescoes were astounding but photography wasn’t allowed in there. There were some folks clicking away, but my rule follower self quickly put my camera in the camera bag to resist temptation. I sat in one of the pews instead and looked around. The common motif was suffering, agony and martyrdom in the mortal world while angels and cherubs waited with olive branches and garlands to welcome the suffering men and women to the eternal world. The ceiling was so exquisitely painted with vibrant blues and gold, I did feel a twinge of disappointment at not being able to capture it in my camera.

After a delicious dinner of crottchetta de pollo (dumpling made of rice, cheese and chicken – deep fried, of course) and this

I came back to the hotel to find Sean waiting for me. He succeeded in making me feel guilty about eating dinner without him, while he rushed back from work to have dinner with me, so I went out, again, to get him something to eat. We walked all the way to the Trevi fountain, bought a delicious biscuit flavored gelato (my second dessert for the night) and sat by the steps of the Trevi fountain marveling at the illuminated statue of the Ocean, which rides in a chariot drawn by two sea horses and two Tritons. I read ‘Tradition claims one coin (cast backward over the left shoulder) ensures a return to Rome, two bring love and three as wedding in the Eternal City.’ Whoever is cleaning out the fountain is making a fortune, methinks. But one is also alerted that this area is notorious for pickpockets as well.

I will end this long blog with a realization and a wonderful experience. First the realization. I realized that after a very long time, I was actually the master of my own schedule for seven whole days. I wasn’t accountable for anybody or anything. I was free of sport schedules, homework schedule, dinner, baths, disciplining et all. The whole day luxuriously stretched ahead of me to do whatever I pleased with it. This was a rare opportunity indeed and I planned to make the most of it. I was free…for seven days.

The beautiful experience was at Chiesa Santa Maria Maddalena, a church dedicated to Mary Magdalene. I left the bustling Della Rotonda in front of the Pantheon to explore the church of Maria Maddalena. I am attracted to the churches in Rome for their architecture, the ambiance, the sculptures, the ceilings and the frescoes and mosaics. This church, too, did not disappoint. It was ornate, beautiful, serene. But a mass was being celebrated. After overcoming my initial irritation at the wrong timing, I decided to sit at the last pew to wait for the mass to end. My legs were weary and my camera bag seemed to be getting heavier by the minute.

The sweet, calm voice of the priest and the musical notes of Latin did magic to my senses. The sound, completely incomprehensible, unbelievably sweet, washed over me, soothed my tired body and mind. I felt overwhelmed at my good fortune – sitting in Rome, in a beautiful church, listening to mass in Latin. I am not religious but the solemnity of the rituals of the communion moved me. There were no more than ten people in the church listening to mass yet the beauty of their faith was fascinating. The scene was surreal. I left when the mass ended, content, truly happy and without any pictures. I will go back.

Plan for day three is to pay homage to the Sistine Chapel at the Musei Vaticani. Hope the line isn’t too long.