Rome….ephemeral, enigmatic, modern, ancient. Longfellow wrote: “Tis the centre to which all gravitates. One finds no rest elsewhere than here. There may be other cities that please us for a while, but Rome alone completely satisfies. It becomes to all a second native land by predilection, and not by accident of birth alone.” That sentiment holds true for me as well. Rome is like Janus, the two-faced ancient god of new beginnings and transitions, who looks forward while peering back. The main streets bustle with traffic and dazzle with Gucci, Prada, Dolce & Gabbanas, yet the quiet narrow alleyways wind between warm, brick tones of houses to small piazzas, or to staircases descending to bubbling fountains.

Sean and I were headed to Rome for a week. My mother’s day/birthday gift from my husband. I left my electronic devices at home including the cell phone. Packed a notebook and lots of pens to take notes, write down streams of consciousness in the old-fashioned way.

As we started our descent to Rome after an almost nine-hour flight, I chanced to look out of the window to get a glimpse of this – the snow and cloud encrusted top of the Alps. I have rarely known such happiness at a sight.

After we disembarked the plane and cleared customs, I went looking for a ladies room along with some other women, only to discover that most of the restrooms in that particular terminal were blocked AT THE SAME TIME for cleaning. Some ladies tried to explain to the janitor in English why that may seem unreasonable to many. The janitor tried to explain to the ladies with a nonchalant shrug that he really didn’t care. One disgruntled female voice said ‘Welcome to Italy!’ We stood in a long line in front of one bathroom for the disabled to take care of our business while sharing commiserating smiles and shrugs with each other. I came back to the luggage area to find that Sean’s bag was missing along with a few others’. My joy at being in Rome started deflating a bit. Amidst utter confusion, we were told one of the conveyor belts was malfunctioning, more bags are on their way. Finally, Sean’s bag danced its way to us. All was good with the world again.

Our sweet cab driver did not speak a word of English. Sean tried his Spanish and fake Italian to give directions. It worked. We arrived at our Hotel Arenula on Via Arenula. I couldn’t be happier with its location, my favorite Pantheon was a mere seven minute walk!

After a refreshing shower and a two-hour nap, we were ready to take on Rome. I was so excited and awed at the same time to be in Rome after 10 long years I started suffering from my country mouse syndrome – stepping off curbs in the face of on coming traffic to click pictures, bumping into people and saying ‘scuzi’ a hundred times. Sean tells me he had to clutch my shirt twice to pull me out of the road while I was busy taking pictures but I don’t believe him for a minute! Before reaching the Pantheon we stopped for a bit of lunch at a small pizzeria. I had a hot dog (sorry) and Sean ordered a pizza with fresh tomato, basil and mozzarella. We shared a spinach dumpling, whose Italian name I completely forget.

Next stop was the Pantheon, which is now called Chiesa S Maria Ad Martyres. Originally, the Pantheon was a temple built by Agrippa in 27 B.C dedicated to all gods. Byzantine empire donated it to Pope Boniface IV around 608 Ad.

For me, personally, the tomb of Raphael was meaningful. It is composed of a beautiful antique sarcophagus. He died in 1520 at age 37. Found an interesting information about the inscription written on the upper edge by Cardinal Pietro Bembo, poet and humanist (1470 – 1547). Supposedly, Alexander Pope translated the inscription without acknowledging the Cardinal for another epitaph.

“Living, great nature feared
he might outvie
Her works; and dying fears
herself to die.”

Piazza della Rotonda, surrounding the Pantheon is a vibrant place with restaurants, pizzerias, snack bars and gelato places. And a great place to people watch, if one is so inclined. The fountain in the center was designed in 1578 by Giacomo Della Porta and in 1711 Pope Clement XI stacked an obelisk on top which came from the temple of Isis.

Pantheon was my choice, I gave Sean the option to choose our next destination. He chose St. Peter’s Basilica. It is a long walk from the Pantheon but we were up for it. On our way, we stopped by to peer into the gorgeous Chiesa Luigi Dei Francessa. The beauty of the frescoes on the ceiling and the sculptures were completely overwhelming. 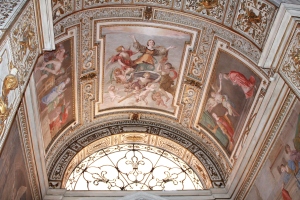 Back on our way to Basilica, we caught a glimpse of the Castel Sant’ Angelo and the Bridge of the Angels.

The Basilica, a humbling experience as always. Spent a few moments standing in front of The Pieta taking in the beauty and serenity in Mary’s face, holding her dead son in her lap.

We needed to get back to meet Sean’s colleagues for dinner at Trastevere so we did a quick, unsatisfactory tour of the Basilica and ran out. I didn’t mind since I had already planned a trip to the Basilica on my own one of the days during our stay. We rushed out but not before getting a snap of my favorite

The day ended with a lovely dinner of pasta with bacon and cream with some lovely people. Came back to the hotel to jot down notes, edit pictures and went to bed happy thinking of the six more days of exploring Rome that lay ahead of me.

The plan for Day 2 was to go to the Roman Forum, Colosseum, Church of San Clemente and Pantheon again.

6 thoughts on “AMOR! Some call her ROMA! Day one.”