We got an early start from the hotel. The driving distance from Sacramento to Yosemite National park is close to 3 hours and I slept at least half of that time. I sometimes feel guilty falling asleep on the passenger seat as Sean drives but not guilty enough to keep myself awake. When I woke up and looked around, the scenery around me had changed. All around me were lush green and gentle hills. And in the distance, shimmering in icy blue were peaks of Sierra Nevada. While my family got excited and chirpy that the destination was near, I got silent. My mind was cluttered with concerns over health of my loved ones, deadlines and schedules but I had decided to put all my worries and stress in the farthest corner of my mind as I submerged myself in the joys of being with those I love the most within the splendor of natural beauty. I hoped to soak myself in the beauty around me and hopefully, emerge rejuvenated, restored. As I watched in silence, Merced river flew by one side of the road with first, a gentle murmur and then a roar. As we came close to the park, the water raged next to us while the hills rose on the other side with occasional signs warning travelers of falling rocks. Slowly, everyone in the car fell silent as we took in the verdant countryside and powerful river. What else lay in store for us? Soon enough we spotted our first waterfall and although during the course of 3 days in the park we will see plenty of waterfalls, they never lost their charm for us. Each time we saw one we would stop each other and exclaim, “Look, there is a waterfall!” And we would pause or retrace our steps to catch a glimpse. 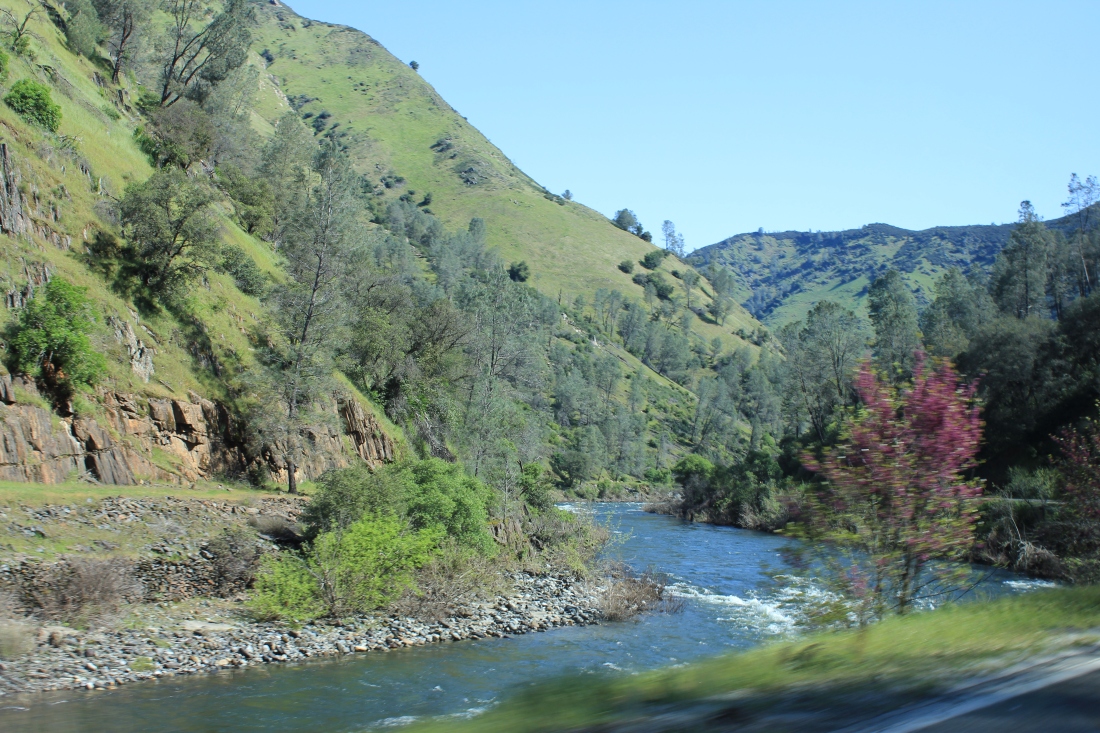 The line to enter the National park was long. Ryan got impatient and got out of the car to walk along the parapet next to us. We crawled towards the entryway to get our 7 day pass and enter paradise. Slowly the line of cars moved and we crossed the threshold.

The first stop was Yosemite Valley Visitor Center. On the way to it, we saw several cars parked on the side of the road and its occupants out on the road with their cameras held high, clicking away the magnificent Yosemite falls. We saw it while we drove on and Ryan urged Sean to ‘have fun but not too much fun and keep his eyes on the road ahead.’

We parked and walked to take in the incredibly beautiful and powerful Yosemite Falls before walking over to the Visitor Center.

The sheer force of nature amazed us and also made us aware of our insignificance in the grand scheme of things.

My chat with the ranger at the visitor center was very productive and rewarding. He said all the trails are open, however the folks who try to summit Half Dome come prepared with lots of snow gear and ice picks since the trail up there still has considerable, knee deep snow. I looked at my over achiever husband and said, “So, NO!” The ranger looked at me and said, “We can not say a forceful NO like that to hikers but yes, if I could I would say the same with the same emphasis!”

Now that the prospect of losing my husband to Half Dome was out, we looked at different trails for the following day. But we decided to climb the Yosemite falls to see how far we could go up and discover the view from up top. So we retraced our steps back to the falls and went in search of the trail head. With a deep breath and deeper resolution we started the trail with our young Ryan leading the way. The rangers urge the hikers not to stray from the trail so as not to trample the local flora that grow in abundance in the park. Within a few minutes, I was completely out of breath. I urged the family to move on while I panted. I said I will catch up but Sean just hung out with me, pretending to take in the view. No matter how many times I said I did not want to hold him back, I will be up soon, he stayed, just looking out without saying a word. He was also our mule carrying water, coats and other climbing paraphernalia. Sahana had the camera, Ryan had another water carrier and I carried my own self. Once I got into a rhythm, the steep climb became somewhat easier and I could climb at a steady pace. Fortunately, there were enough instances where we all stopped in wide eyed wonder at the visual feast ahead of us. As we got closer to the top of the falls, the panoramic view of the Yosemite valley and the gushing waterfall provided an incredible view. What an experience!

Midway through the climb, Half Dome exposed itself to us against the back drop of bright azure sky. The vast expanse of nature around us was breathtaking and incredulous.

If you make the one-mile, 1,000 foot climb (via dozens of switchbacks) to Columbia Rock, you will be rewarded with spectacular views of Yosemite Valley, Half Dome, and Sentinel Rock. From there, it is worth the time and energy to hike another 0.5 miles (0.8 km) (some of which is actually downhill!) to get a stunning view of Upper Yosemite Fall. Depending on the season, you may even feel the mist from the fall, which may be welcome respite after the tough climb.

And that is exactly what we did. When we climbed up to view the Upper Yosemite Fall we met with some hikers who were on their way down. We still had some fuel in our tank and the desire to see the view from the absolute top so we asked the hikers how the trail was. They all said there was considerable ice. A couple of young hikers had turned around because they did not want to tackle the ice. That put a damper to our spirits. We were not sure we wanted to navigate steep, icy terrains in the fading light of the evening. So the consensus was to turn around.

We reached our car when the sun was almost down. As we drove back to get to our hotel in Mariposa (a 45 minute drive) from the park we got to glimpse yet another hue of the green mountains in the dying light of the sun. It was truly mesmerizing. Merced river, swollen and raging, guided us back as we drove by it.

By the time we reached Mariposa and decided to stop for dinner, Sahana was feeling unwell. She opted out from eating anything while we stopped at a Subway to pick up sandwiches, checked into our hotel, cleaned up and hit the hay. The next day was going to be a full day of hiking so we needed the rest. My unused muscles were reminding me painfully that I was extremely out of shape but my rejuvenated mind told me I was up for the challenge. The following day we planned to hike up the Vernal Falls and then further up – Nevada Falls. Now for some sleep…..