Skip to content
madammommy Photography, The world around me. May 7, 2014 4 Minutes

We slept in on the sixth day. Our vacations are those that you NEED vacation from, but all of us seem to thrive in action, yes even Sahana, if she is not dragged out early.

After yet another chocolate croissant Starbucks breakfast we got in Escargot to drive 40 Km to Tulum. Both the children had enough of ruins at this point but not their ruin loving mother. Tulum was built between the 13th and the 15th century and was an important port for trade, especially obsidian. The ruins, perhaps, do not match in grandeur with the impressive ones at Chichen Itza or Uxmal but the setting of the ruins is indeed spectacular! It stands on a bluff facing the east and the ancient shrine of the Diving God greets the rising sun every day over the breathtakingly beautiful Caribbean sea. 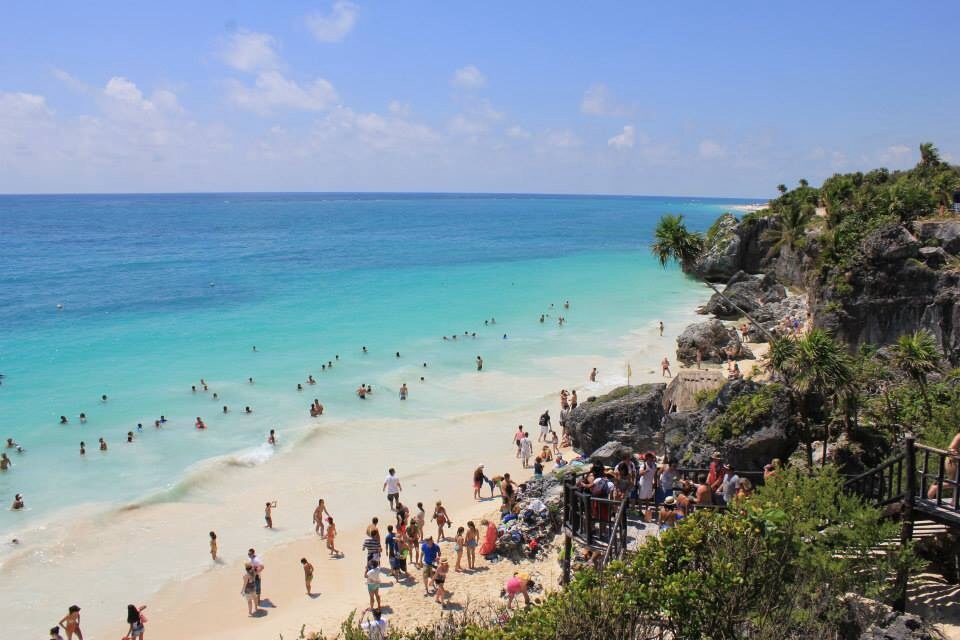 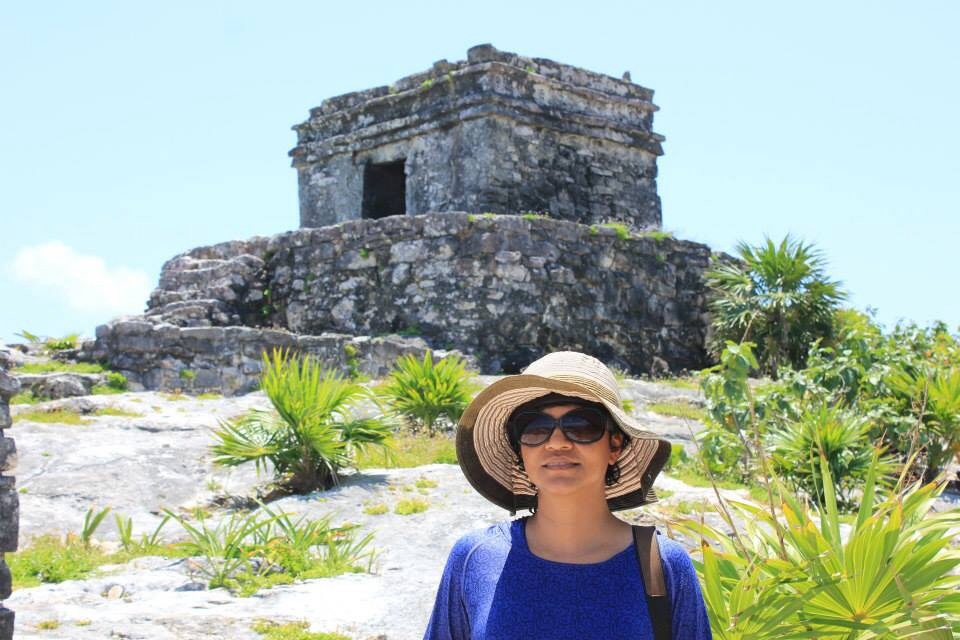 I am not sure what word would describe the blueness of the ocean. There was not just one blue though, there were different hues and shades of blue. No matter how talented an artist or a painter is, can they ever produce that perfect hue in their canvases or papers? Is that blue an example of what perfection is? Just so? Not a bit more and not a bit less? As I read my journal, I see I wrote down ‘pristine, turquoise, aqua marine – none of these seem to really bring forth the true hue of the color blue.’

The children decided to jump in the water while Sean and I continued to tour the entire site paying homage to the reigning deity of the area – the descending god. It is a figure with legs splayed upwards and head down diving from the sky to the ocean.

According to Ancient History Encyclopedia:

The Temple of the Descending God, located at Tulum, is an intricately designed structure which is illuminated brightly by the setting sun every April 6th – which is the birthday of The Descending God (so named because he is always depicted with his feet in the air)and is carefully aligned with the planet Venus. While it has long been held that Tulum is the only temple complex to depict the Descending God, his image has been found elsewhere. Attempts to link him to the figure of Jesus Christ have been dismissed by all reputable scholarly authorities.

The camera, as some of you know, is almost surgically attached to my hip. As I walked the ruined walls at the edge of the cliff and looked down at the brilliant emerald sea beneath, I kept stopping to take pictures. And when I looked at them later, I discovered I had taken picture of the same scene again and again – a multitude of times, obsessively. My desire, perhaps, to capture the entire day, along with the blue sky, the wispy clouds, the magnificent ruins, the mass of humanity speaking various languages of the world, the sea, the moments, my family, my feelings of joy and fulfillment, in each shot.

After walking throughout the site, Sean stripped to his swimming trunks and entered the water. I did not bring any change of clothes. Nor did I have swim suit underneath. So, like a true Indian, I followed my husband in the water, fully clothed. And had the best time swaying with the waves.

Finally, when nobody could ignore the pangs of hunger any longer, we made a unanimous decision to bid adieu to the sea, the sand and the ruins to head towards Akumal, north of Tulum, towards Playa Del Carmen. We were on a mission to find the restaurant La Buena Vida in Akumal, as suggested by some fellow travelers from Canada. The nachos there were to ‘die for’ they said. The setting of the restaurant, on a tiny cliff by the sea, was unparalleled, they said. We had no directions, no GPS and Sean refused to ask directions. By sheer instinct he got us there while I grumbled about typical male pride about directions. He parked the car and said, ‘Here you go, we found it!’ smugly as we walked in. There were palapas roofs on picnic tables by the water and we were directed to one of those.

La buena vida – the good life. The name is chosen from one of the cardinal principles of the ancient Mayans, live the present moment fully. Be in the moment. Nothing is more important than being in the moment, living it, doing it justice. The worries can wait.

I live by the important (for me) mantra ‘This too shall pass’. In moments of sorrow, this thought gives me solace and the courage to face my sorrow. In moments of joy, this reminds me that happiness too is transient and I must make the most of it. The memory of the happy times become that jewel that I wear around my being, which embellishes my soul. Hence the photos, hence the journal.

I remember sitting there with my little family looking at the vibrant blue water, the coral reefs afar, the gentle sway of the palm trees, the yellow sand beneath my feet, I thought ‘this moment too shall pass’. But I am so grateful to HAVE this moment, to be able to live it fully. I remember thinking this must be what true happiness feels like…la buena vida.

We drove back to Merida on the seventh day and headed back home on the eighth morning. I brought back happy times, laughter, thoughts, bonding and the realization how different traveling with the children is becoming. I remember hauling luggage and entertaining both of them during long flights to India. This time, however, Sahana navigated the airports, Ryan lugged around our heavy suitcase and a backpack. My offers to help carry luggage were refused with ‘we got this, Mom!’ I ended up carrying only my purse the entire trip. That was sweet, but somehow bittersweet.

This was the last post of the trip. Thank you so much for reading my journey and being a part of it. I appreciate you all greatly.