We checked out from our hotel Dolores Alba in Merida by 8:00 am on Tuesday morning and started our journey to see Chichen Itza – arguably the most visited Pyramid built by the ancient Mayans. After an uneventful drive of one hour and twenty seven minutes (Sahana timed it) we arrived at the gate of the ruins. As we parked Escargot and looked around us, we knew this site will not the have peace, quiet and relative silence of Uxmal. There were busloads of tourists with loud guides speaking different languages, people selling their wares everywhere. There were artifacts and trinkets, ice cream and cold drinks, masks and men dressed up as Mayan warriors, there were also little monkeys and a two month old baby lion. One could take pictures with them at a price.

As we made our way inside the site of ruins, the impressive Kukulkan Pyramid, also known as El Castillo stood up against the azure blue sky, just like it always has for centuries before. For a few minutes, I became oblivious of my surroundings as I was transported to the Early Classic period (around 600 AD) when the city of Chichen Itza rose into prominence.

‘Chichen Itza which means “at the mouth of the well of Itza “, is the 2nd most visited archeological site of Mexico today. The Kukulkan Pyramid in Chichen-Itza which known as “El Castillo” (the castle), is one of the new seven wonders of the world elected in 07.07.2007. It is exactly 24 m. high considering the upper platform.’

There are four stairways each with 91 steps ending at a single top step at the temple’s entrance. The number of steps add up to 365 – a step for each day in the Mayan Calendar. 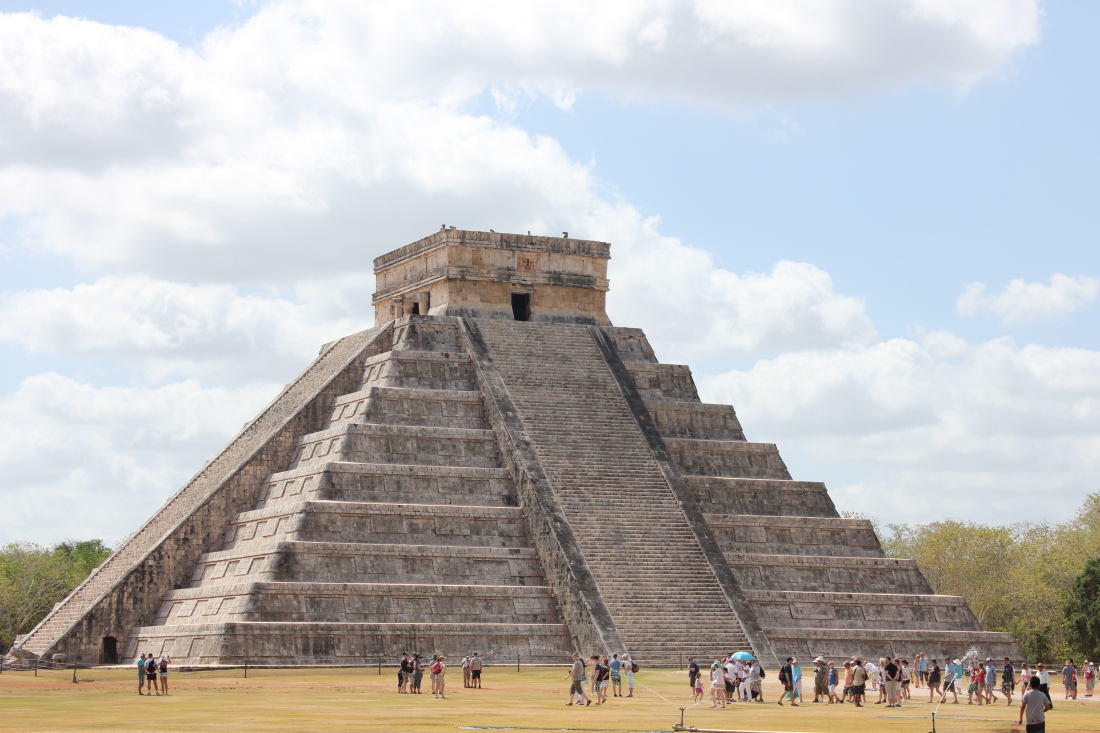 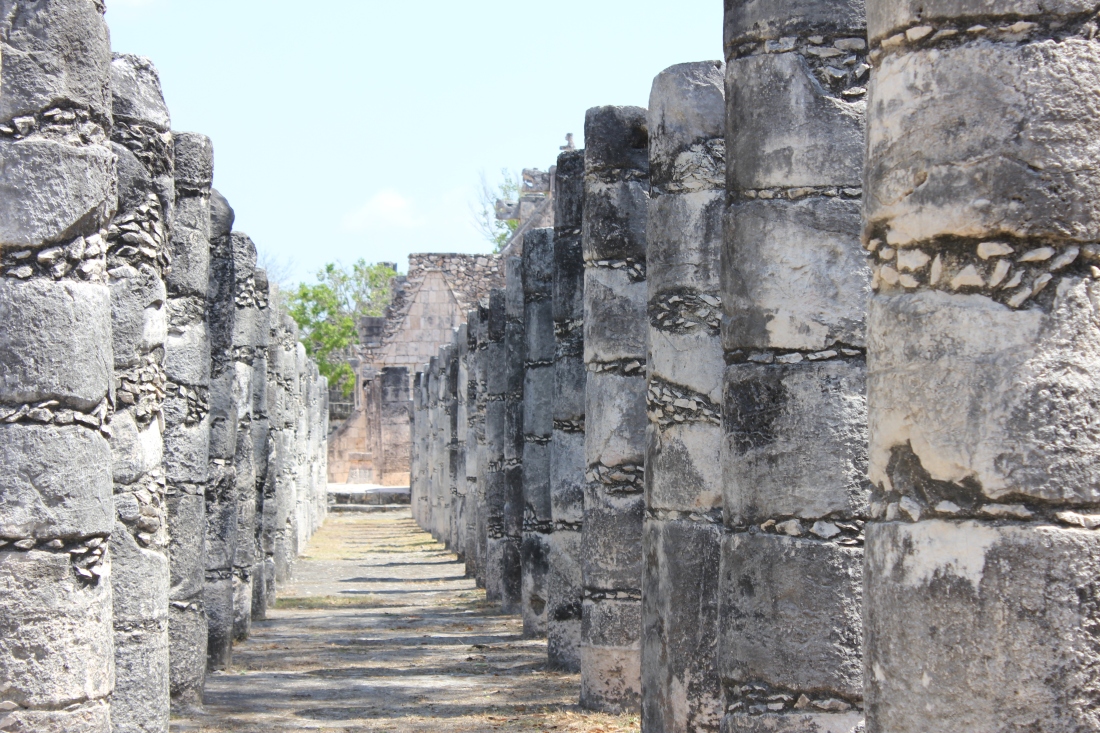 The ruins of the city of Chichen Itza were majestic and grand and very, very catered to tourists. The presence of hawkers trying to eke out a living from this often visited site took away the essence that I wished to experience. It was too hot, too crowded, too noisy. A part of me tried to justify the tourism based economy but a huge part of me deplored it. There were hawkers everywhere trying to sell knick knacks at exorbitant prices. “Almost free” chant followed us everywhere. Hawkers started to converse with me in Spanish expecting the Mayan looking woman to translate to the gringo with her. The Mayan looking woman, however, smiled sweetly and hastily notified, “No habla Espanol” and the gringo, fluent in Spanish, took over.

After four very hot hours in Chichen Itza, the children took an ice cream break. All four of us were hot, flushed and ready to move on. We slowly made our way out to Escargot, in quiet contemplation of the Kukulkan Pyramid in its heyday. We poured some cold water on ourselves and headed towards south. Our next destination for the four days was Playa Del Carmen, just 42 miles south of the more famous Cancun. A fine moment of ‘I told you so’ arrived when my husband disregarded my suggestion of filling up the car in the city of Vallodolid before entering the Cancun Cuota (highway), thinking he will fill it up on the way. Well, he thought wrong! As we kept going on the almost empty highway and the gas indicator kept dipping dangerously, we discovered the next gas station was 93 kilometers away! I kept one eye on the indicator and other out for salida (exits)! We finally arrived at a toll booth where Sean pointed to the gas gauge and asked if there was a gas station nearby where he could fill up! Fortunately we were not the only clueless tourists who found themselves in similar predicament on that particular highway. The lady at the toll booth assured us they could sell us a couple of liters of gas that will take us to the gas station situated at the outskirts of Cancun. We bought the gas – at a steep price, of course! And off we went.

The Cancun cuota, as the name suggests, takes us straight down to the beach city of Cancun from Chichen Itza. It is a pleasant drive, a pretty drive – if the gas tank in your car is full, stomach is full and your bladder empty. They were no exits to get off and buy food or use restrooms.

We eventually made it to a gas station with the little gas we bought at the toll booth. Finally with a full tank of gas, a relieved heart (mine) and empty bladder we started on our Cancun adventure, except we had no clue where to go. Sean kept saying, ‘Keep looking guys! Tell me if you see something interesting and we will stop!’ But by the time we said, ‘Hey, that looks like a fun place! Let us stop there’, he had driven away. At that point we were all cranky with hunger and were snapping at each other like a herd of crocodiles! We could not find places to park, we could not figure out the lay of the land and we kept driving away from abodes of the food god. It was an utter mess! Finally we saw a very generic looking mall as a last resort before we killed and ate each other. And surprisingly enough a lovely restaurant was found by the bayside, right next to Hooters.

After dunch (lunch and dinner, since it was 5:30 pm by that point) we decided to abandon our initial plan of exploring Cancun and headed towards our final destination for the day – Playa Del Carmen.

Playa was easy enough to find, but the grid system of the roads was a bit more challenging to figure out, at least in my brain. My wizard of the path finder husband sorted out th grid system quickly enough and we found our temporary shelter Adventure Experience Hotel without much trouble. The hotel was half a block from the famous fifth avenue of Playa Del Carmen and a five minutes walk to the beach. I can only recommend the hotel for it’s location but unfortunately, for nothing else. Since we decided to spend our days touring different areas around Playa, the hotel was adequate for us.

At this point, my sore finger needs to be mentioned. As the days passed, I looked at it with increasing anxiety and a morbid awe. I had been popping painkillers to manage the constant pain and throbbing, since without the painkillers the pain was intense enough to wake me up from an exhausted sleep. The finger had swollen up like a sausage and the pus around the site had assumed a sickening yellowish green under the tender skin. I knew I was in trouble but I was also determined to get through the vacation without any sort of intervention. I figured I will have it taken care of once I went home.

Once we settled into our hotel, showered, changed and went out to stretch our legs, Sean insisted we go to a pharmacy and get my finger examined. The pharmacist looked at my finger, shook his head and rattled off in Spanish. All I got out of that conversation was ‘un medico’! We walked a block to a different pharmacy where a doctor had an office but unfortunately the doctor’s office was closed. Sean still dragged me to talk to the pharmacist and explained my situation and showed my finger. While all the talk in Spanish was going on I lost focus on my surroundings and looked at my angry finger, finally admitting to myself I needed antibiotics and my finger was badly infected. I was vaguely aware of two very young women in tank tops and a young man standing in that pharmacy next to us. While I stood there feeling sorry for myself, one of the young women came over to me, took my hand and started probing and prodding the wound. I was first stunned at this breach of personal space and then when electric shocks of pain registered in my brain I snatched my hand away from her and said, semi-politely, ‘My finger hurts, I need doctor!’ The woman smiled sweetly and pointed to herself, ‘Doctor!’ She WAS the doctor who had just finished her office hours and was on her way home when we waylaid her with my infected finger. She examined my wound, wrote a prescription for antibiotics and advised me to be strong since Sean will have to poke a hole and drain the finger. I gulped. When Sean offered to pay for her consultation, she refused payment, smiled again and wished us good luck.

Armed with syringes, hydrogen peroxide, gauze, iodine, bandaids, antibiotic tablets and antiseptic cream we returned to our hotel room. After washing his hands twice my valiant husband started ominously fiddling with the syringes in a poorly lit hotel bathroom – in Mexico! All of a sudden I chuckled. This is what memories are made of, I suppose! The good, bad and the ugly!

I called Sahana, who showed a very gleeful interest in the whole process, to hold down my hand. As I looked away, I helped my husband by saying ‘Don’t put an air bubble in my vein. That will kill me!’ (He was, of course, nowhere near a vein. I am just evil like that:) ).

And then he plunged the syringe into the skin. And then the pain…

One thought on “Off to visit the Mayans – Day 3, Chichen Itza and Playa Del Carmen”