See if you can follow my leftover transformation process:

From a cook book called The Arabian Nights Cookbook that I checked out from the library, I made baked beef kebabs. My kids and I had a few. Then I packed the remainder and stored them in the fridge.

I knew the children (why do I still call them children? One is 21, the other is 16) would not eat the kebabs any more, they move on to greener pastures (new food, not leftovers) during meal times so I crumbled the kebabs up, cut some potatoes, chopped some onion, ginger, garlic, tomatoes, threw in some spices along with bright green peas and transformed my kebabs to keema mutter. I ate the keema mutter with rice for 2 meals. There was still a lot left. I really need to learn to cook in smaller amounts.

Yesterday, I made home made paneer for Sean. This time, instead of throwing the whey away, I saved the liquid. After reading up on the nutritional value of whey, I made home made rotis, and used the whey to knead whole wheat instead of water. I made a few rotis for Sean. I left some dough to make mughlai paratha, or a version of it to use up leftover keema mutter.

Mughlai paratha is generally meat stuffed bread and the bread is cooked with egg. I made balls with leftover dough and rolled them out to about 7 inches in diameter. Once the griddle was hot, J placed the roti on the griddle. I had 3 beaten eggs ready and right away put 3 or 4 tbsp of beaten eggs on the roti on the griddle and spread the egg all over. Then I spooned in 2 tbsp of keema and folded the roti on both sides over it. Poured a tsp of vegetable oil around the sides. I was supposed to make a pocket but I failed. I let the folded roti cook till egg had set and flipped to cook the other side. Once done, I had a very poor relation of the delicious moghlai paratha. The poor relation did not taste like the real deal but it was quite good. Both kids approved.

I was so thrilled with myself that I proclaimed myself queen of leftovers yet again.

I reused, recycled, reimagined! There is such joy in transformative creations.

All of you hail the Leftover Queen a.k.a me. I claim the title, the crown and the throne. I claim all of it.

I wrote about my nonstop cooking on the Diwali weekend. If you have not read it yet, you can read it here.

Since I go overboard when I cook, I ended up with a lot of leftovers. Generally, Sean eats leftovers for weeks and he is very happy to do so. As we pack away the food in the fridge on the day I cook, I can see his mind planning his meals for the week ahead. He threatens us not to finish the dal or the paneer because he plans to eat them for another meal. The threat is not serious, only semi serious. But this time, I must have poisoned him somehow because his stomach did not feel great for a couple of days after Diwali and he did not want to exacerbate the situation by eating spicy dal makhni and creamy malai kofta. So I, who is not fond of dal makhni or malai kofta too much, had to eat the leftovers. The children, in general, rarely eat left over Indian food. They are high maintenance but thankfully I am done maintaining them. They maintain themselves quite well when it comes to meals.

After 3 days of eating leftovers to empty the fridge, I had a plan. A beautiful, bold, exquisite, earth shattering, tradition breaking plan. I thought outside the box.

This is what I did. I took out the container of malai kofta from the fridge. I follow Sanjeev Kapoor’s fool proof recipe of malai kofta. It is easy and delicious. You can look at the recipe here.

After the walk, I kneaded for another 3 to 4 minutes and made little balls to roll out.

The next part was easy. I rolled the dough out into rotis and cooked them on the skillet with oil spray.

The malai kofta parathas were ready.

I told myself I just transformed a leftover into a healthy meal. Whole wheat, paneer, potatoes, ok fine, a little cream in the gravy made it a tad unhealthy but it tasted good. Everything tastes good with cream and butter, sigh! As I finished cooking the last paratha, my family casually gathered around, “Whatcha making?”

Ryan was stressed about a math test so he walked around to calm his nerves and ate at least 3 parathas in the process if not more, Sahana and Sean ate a few with left over dal makhni. I ate 3 of them. They were soft and oh-so-flavorful. I decided right then that I will claim the title of Leftover Queen in my blog post. And I just did!

When I make my husband sit down and read this blog at gun point, he will be mortified that I shared some of his deepest secrets with the world. But share I must because those moments and secrets are very tender and when we are both old and Sage is just a memory, we can look back at this and remember the unconditional and uncomplicated love he generously gave us.

To put it very stereotypically, Sean was the quintessential male who was getting a dog. Just before Sage came to us at 8 weeks, he would make arbitrary comments like ‘a dog is just that, a pet! I find it funny when people make it their children. They humanize them! That is ridiculous!’ He doesn’t come from necessarily a dog loving family, although they owned a dog when he was growing up. He dog sat for friends, but as a dog owner, he was a newbie. I heard him and stayed silent, not knowing what kind of owner he would turn out to be. Of one thing, I was certain, he wasn’t going to be an unkind one. I read up zillion books on puppies, dog training, dog ailments, fictional dog stories. I went back to my childhood favorite James Herriot. I rented Marley and Me to watch with the kids (and then did a lot of explaining to 4 year old Ryan – as Marley’s owners tried to conceive a baby) ! Finally, after thanksgiving, Sage was ready to come to us.

As Sage walked into our house diffidently, the three of us – my two children and I melted like ice cream on a hot summer day. Sean kept his distance so as not to ‘overwhelm’ the puppy. Finally, when he uttered ‘Hi there big guy!’ Sage looked up at the big, tall human, heard his deep voice, promptly rolled over on his back and presented his belly in complete submission. That continued for quite some time. A sighting of Sean and bam – tummy side up, little paws kicking in the air in total submission. I am sure the first few nights, Sean silently questioned our decision of bringing a puppy in the family. Sage squealed and cried and wanted the furry comfort of his mommy. I was a poor substitute. I carried his crate to the guest room, put it right next to the bed, let one of my arms dangle where he could sniff my fingers. That seemed to calm him. We both caught a few winks that way for about a week, till Sage started sleeping through the night. 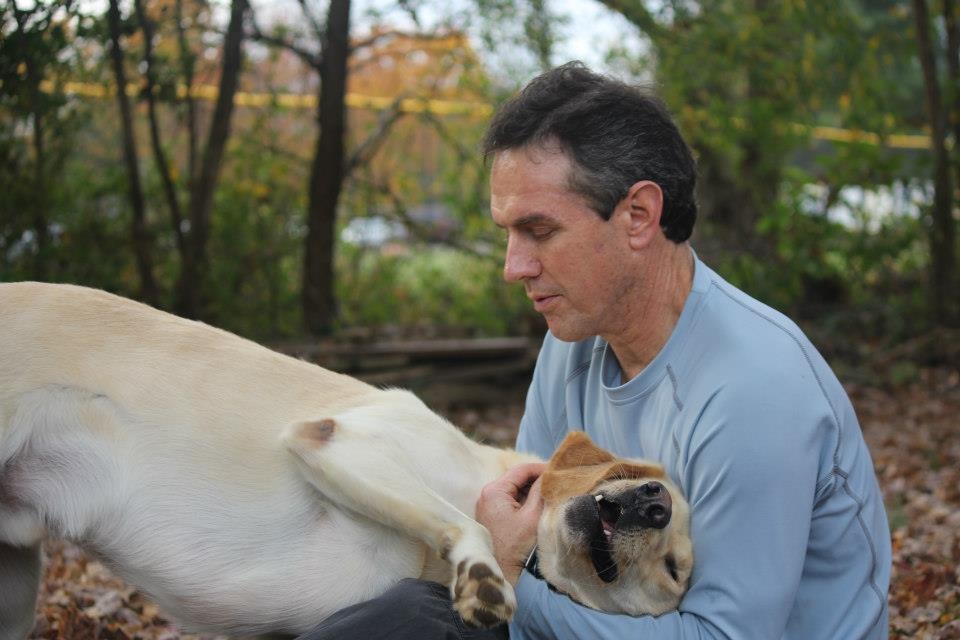 The first few months were fun and frustrating. There were chewed furniture, there were accidents, there were sock stealing and sharp puppy teeth. Sean was loving but firm. And Sage was still….a dog, a pet. Then one fine morning, we decided to take our 8 month old scared dog to a dog park in an attempt to socialize him. It was a disaster from the start. Sage stood by us, tail between his legs, literally shaking. Sometimes he would peek his little nose to take a sniff and retreat quickly when another dog came by to say hello. In the meantime, a German Shepherd and a huge Mastiff mix got into a terrible fight resulting in a ripped ear and a bite on one of the owner’s arm. While this chaos ensued, we tried to make a hasty retreat. But Sean was apprehended by a pit bull who cornered the poor guy and started barking viciously at him. A transformation happened before my eyes. The runt of the litter, our scared puppy launched himself between the pit bull and his human. He didn’t bark back but he stood his ground and protected his ‘dad’. The owner of the pit bull ran up, apologizing profusely. The dog didn’t like people standing in front of a chain link fence. Sean was doing just that, it was ‘nothing personal’. We left, and needless to say, never went back to that particular dog park.

The relationship, however, between the dog and the man changed. I don’t know if I attribute the change towards that particular incident or the charm that Sage naturally possesses and it was simply a matter of time. All I can say, I witnessed a change in words and demeanor. Gone was the ‘pet’ owner, instead ‘dad’ took over. I overheard mumblings like ‘you are my boy! you are my good boy! Aren’t you my good boy?” as Sage’s belly got rubbed. Ryan was chastised with ‘leave your brother alone’ when he was too rough with the pup. I was found thus, “Go find your mummy! Where’s is your mummy, Sage?”

Today Sean is most certainly the prefered parent as he is the one responsible for walks, runs and playtime. Mom is the one responsible for heartworm pills, flea medication, and dreaded baths. As I see Sean walk around the yard, trimming bushes, sweeping the driveway, I know his white shadow is not far behind. Sage follows him with adoring gaze and a heart full of love. When Sean comes home, he waits patiently for his dad to get out of work clothes before he claims his share of attention. After the initial romp, those two are joined at the hip. Sage silently pads along with Sean, and flops down with a sigh where ever Sean settles. Often times the long snout peeks in through Sean’s hands to investigate the laptop dad is working on. Sean gives an absent-minded patting on his head, and Sage just disintegrates in happiness. He smiles widely, settles down at Sean’s feet, closes his eyes and lets out a sigh of contentment. As long his favorite man is by his side, all is right with the world. They play, run, converse or just commune silently. The mutual giving is a thing of beauty for me to witness. The adoration and the love are precious. Sage came into our lives for a reason, I know. He teaches us to love selflessly, without holding back.

Elton John wrote ‘Your Song’ for the love of his life. I hope he won’t mind if I use just a couple of his lines for both my son with four legs and his human dad because life is indeed wonderful since they are in the world. I don’t know whether humanizing an animal is good or bad, all I know that Sage has added immeasurable value to our lives. His patience, perseverance, unconditional love enrich our lives. In our tumultuous google calendar dictated life, he provides the gentle shade where we come to relax, and unwind. His non judgemental, loving presence is our comfort. Sean transformed from a dog owner to a daddy. I am not surprised. How can one not, when one is given unadulterated adoration for no reason other than simply being, just existing!