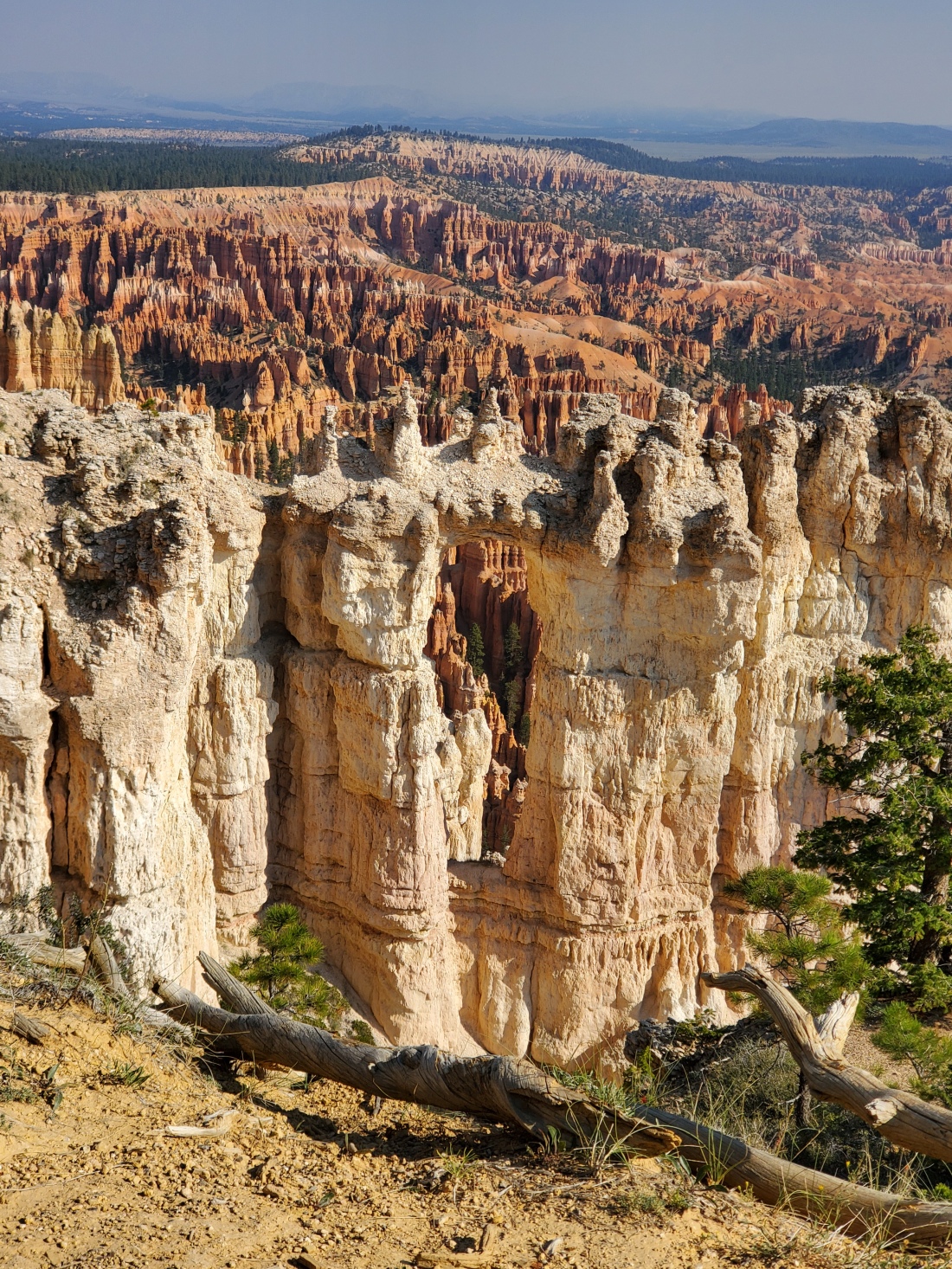 Indian Dick, a Paiute elder living on the Kaibab Reservation, told the Bryce Canyon hoodoo legend to a park ranger in 1936:

“Before there were any Indians, the Legend People, To-when-an-ung-wa, lived in that place. There were many of them. They were of many kinds–birds, animals, lizards and such things, but they looked like people. They were not people. They had power to make themselves look that way. For some reason the Legend People in that place were bad; they did something that was not good, perhaps a fight, perhaps some stole something…the tale is not clear at this point. Because they were bad, Coyote turned them all into rocks. You can see them in that place now all turned into rocks; some standing in rows, some sitting down, some holding onto others. You can see their faces, with paint on them just as they were before they became rocks. The name of that place is Angka-ku-wass-a-wits (red painted faces). This is the story the people tell.”

We again rose very early to get a head start to see the much acclaimed Bryce Canyon. After a picturesque drive, we arrived at the Visitor center, made a plan for our day and started our hike. We took the shuttle to the end of the shuttle stop – Bryce Point and walked the Rim Trail. For a long part of the walk, Sean and I were silent. There was truly nothing to say in front of such splendor and beauty of nature. I do not have words to express the magnificence of the canyon that we witnessed today so here are some photos.

I do not know if the hoodoos are the bad people turned into stone by the trickster Coyote, but they reminded me of intricately sculptured fortresses or castles or even temples.

From the Sunset point of the Rim Trail, we decided to descend about 350 feet to the Sevier River at the bottom of the canyon. There were two combined trails but we chose to hike the 1.3 mile long Navajo loop. I almost died the day we hiked down North Rim, but we had gone down 1400 feet that day. Navajo loop, I told myself, was nothing compared to that. In this trail we saw 3 different and famous structures created by rocks that have been named – Wall Street, 2 bridges and Thor’s hammer.

There was a cool breeze blowing which kept us comfortable as we climbed out of the canyon. I took several breaks to catch my breath but also to take it all in. After completing this hike we walked further along the Rim of the canyon till we got off the trail to get to our car.

The Visitor center had interesting information about the rock formations and also about Paiute Indians who inhabited the area. We then decided to drive 17 miles up the canyon to its highest elevation point, Rainbow point to get an expansive view of the area.

On our way back to exit the park, we saw a prairie dog scurry from his burrow. Prairie dog sighting is quite common in these parts we were informed. Bryce canyon is one of the most picturesque canyons that I have seen. The sights of the hoodoos, the clear, blue sky above, the twisted bristle cone pines stubbornly clinging on to life despite being repeatedly hit by lightning, the chipmunks who tried to climb up my pants to beg for my trail mix, the sighting of prairie dogs – the whole tapestry of the canyon gave me peace. Mother Nature heals, a friend messaged me. “May you find peace in nature.” I did.

We drove back with tired bodies and refreshed souls.